Over the course of about 45 mins, Team Frenzy shared their most anticipated YA HCC publications, so here are a few of mine!

*All synopsis taken from Goodreads.com. To find out more about the novel, simply click on the title and it will take you directly to their Goodreads pages.*

The story that I thought
was my life
didn’t start on the day
I was born
Amal Shahid has always been an artist and a poet. But even in a diverse art school, he’s seen as disruptive and unmotivated by a biased system. Then one fateful night, an altercation in a gentrifying neighborhood escalates into tragedy. “Boys just being boys” turns out to be true only when those boys are white.
The story that I think
will be my life
starts today
Suddenly, at just sixteen years old, Amal’s bright future is upended: he is convicted of a crime he didn’t commit and sent to prison. Despair and rage almost sink him until he turns to the refuge of his words, his art. This never should have been his story. But can he change it?
With spellbinding lyricism, award-winning author Ibi Zoboi and prison reform activist Yusef Salaam tell a moving and deeply profound story about how one boy is able to maintain his humanity and fight for the truth, in a system designed to strip him of both.

Charming As A Verb by Ben Philippe

Henri “Halti” Haltiwanger can charm just about anyone. He is a star debater and popular student at the prestigious FATE academy, the dutiful first-generation Haitian son, and the trusted dog walker for his wealthy New York City neighbors. But his easy smiles mask a burning ambition to attend his dream college, Columbia University.
There is only one person who seems immune to Henri’s charms: his “intense” classmate and neighbor Corinne Troy. When she uncovers Henri’s less-than-honest dog-walking scheme, she blackmails him into helping her change her image at school. Henri agrees, seeing a potential upside for himself.
Soon what started as a mutual hustle turns into something more surprising than either of them ever bargained for. . . .

The Other Side of the Sky by Amie Kaufman & Meagan Spooner

Prince North’s home is in the sky, in a gleaming city held aloft by intricate engines, powered by technology. Nimh is the living goddess of her people on the Surface, responsible for providing answers, direction—hope.
North’s and Nimh’s lives are entwined—though their hearts can never be. Linked by a terrifying prophecy and caught between duty and fate, they must choose between saving their people or succumbing to the bond that is forbidden between them.

Early Departures by Justin A. Reynolds

Jamal’s best friend, Q, doesn’t know he’s about to die . . . again.
He also doesn’t know that Jamal tried to save his life, rescuing him from drowning only to watch Q die later in the hospital. Even more complicated, Jamal and Q haven’t been best friends in two years—not since Jamal’s parents died in a car accident, leaving him and his sister to carry on without them. Grief swallowed Jamal whole, and he blamed Q for causing the accident.
But what if Jamal could have a second chance? An impossible chance that would grant him the opportunity to say goodbye to his best friend? A new health-care technology allows Q to be reanimated—brought back to life like the old Q again. But there’s a catch: Q will only reanimate for a short time before he dies . . . forever.
Jamal is determined to make things right with Q, but grief is hard to shake.
And he can’t tell Q why he’s suddenly trying to be friends with him again. Because Q has no idea that he died, and Q’s mom is not about to let anyone ruin the miracle by telling him. How can Jamal fix his friendship with Q if he can’t tell him the truth? 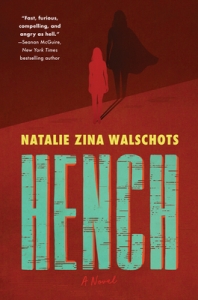 Anna does boring things for terrible people because even criminals need office help and she needs a job. Working for a monster lurking beneath the surface of the world isn’t glamorous. But is it really worse than working for an oil conglomerate or an insurance company? In this economy? As a temp, she’s just a cog in the machine. But when she finally gets a promising assignment, everything goes very wrong, and an encounter with the so-called “hero” leaves her badly injured. And, to her horror, compared to the other bodies strewn about, she’s the lucky one.
So, of course, then she gets laid off.
With no money and no mobility, with only her anger and internet research acumen, she discovers her suffering at the hands of a hero is far from unique. When people start listening to the story that her data tells, she realizes she might not be as powerless as she thinks.
Because the key to everything is data: knowing how to collate it, how to manipulate it, and how to weaponize it. By tallying up the human cost these caped forces of nature wreak upon the world, she discovers that the line between good and evil is mostly marketing. And with social media and viral videos, she can control that appearance.
It’s not too long before she’s employed once more, this time by one of the worst villains on earth. As she becomes an increasingly valuable lieutenant, she might just save the world.

All About Us by Tom Ellen*

If you could turn back the clock, would you choose a different life?
Ben’s always loved the month of December, but this year, with his relationship with Daphne on the rocks, it’s missing its usual magic. And then his old friend Alice gets back in touch. Ben’s always thought of Alice as the one that got away, and he can’t help but wonder: what if he’d done things differently all those years ago?
He never imagines he might get to find out… but when a stranger sells Ben a mysterious watch one freezing winter’s night, he’s astonished to wake up the next morning on 5th December 2005: the day he first kissed Daphne, leaving Alice behind.
Now Ben must make the biggest decision of his life, all over again. But this time around, will he finally find the courage to follow his heart?
All About Us is a captivating novel of heartbreak and loss, friendship and hope – and how the choices we make throughout our lives will shape our destiny. *adult title

Those are the books from HCC Frenzy’s upcoming YA publications that I am very excited to read! Thanks to Ashley, Marisol, Maeve, and the rest of the HCC Frenzy team for inviting me to attend another one of your spectacular Frenzy Presents events!