Believe it or not, I have never read a Riley Sager book before! Riley is a critically acclaimed Mystery/Thriller writer, but even though I am a huge fan of that genre, I have still never read any of his books… until now! When I first heard about this novel, I knew I needed to read it, as it focuses on one of my favourite mystery tropes, a mysterious well-known building. And while I wouldn’t say that this is one of my new favourite thrillers, Riley definitely didn’t disappoint! 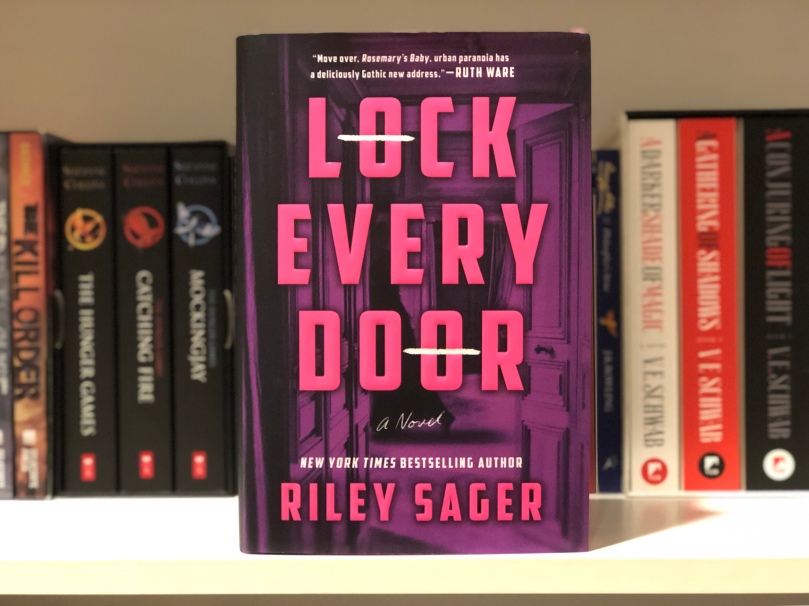 No visitors. No nights spent away from the apartment. No disturbing the other residents, all of whom are rich or famous or both. These are the only rules for Jules Larsen’s new job as an apartment sitter at the Bartholomew, one of Manhattan’s most high-profile and mysterious buildings. Recently heartbroken and just plain broke, Jules is taken in by the splendor of her surroundings and accepts the terms, ready to leave her past life behind.
As she gets to know the residents and staff of the Bartholomew, Jules finds herself drawn to fellow apartment sitter Ingrid, who comfortingly, disturbingly reminds her of the sister she lost eight years ago. When Ingrid confides that the Bartholomew is not what it seems and the dark history hidden beneath its gleaming facade is starting to frighten her, Jules brushes it off as a harmless ghost story . . . until the next day, when Ingrid disappears.
Searching for the truth about Ingrid’s disappearance, Jules digs deeper into the Bartholomew’s dark past and into the secrets kept within its walls. Her discovery that Ingrid is not the first apartment sitter to go missing at the Bartholomew pits Jules against the clock as she races to unmask a killer, expose the building’s hidden past, and escape the Bartholomew before her temporary status becomes permanent.

HOLY… this book was one wild ride!

To be completely honest with you, throughout the beginning and middle of the book, I thought it was quite boring and dragged on a lot. I didn’t feel any connection towards any of the characters, and thought that I had predicted the ending of the book at the halfway point. It took me over a week to read just the first two-thirds of the novel, which justifies me saying that it seemed boring and slow. However, the ending was crazy and super unpredictable! I did not see it coming at all, and was so crazy to read about!

By far my favourite thing about this book was the writing. The writing was so clear and crisp, which made it super easy to visualize everything. Even though I thought the pacing was off during the majority of the book, the writing captivated my attention throughout the entirety of the novel. I also loved how there were little two-page snippets into the future at the end of each section of the book. The peaks into the future made the story super intriguing and even more eery as I read further and further.

Like I said earlier, I didn’t particularly love any of the characters. I don’t think they developed at all throughout the novel. I would have loved to have learned even more about them, especially since there aren’t too many characters that we read about in this novel.

Even if you are a seasoned Mystery/Thriller reader, I think you will still really enjoy this one, as the ending is super unpredictable and crazy. That being said, I gave it 3.75/5 stars, as I really enjoyed the ending, but didn’t really love the first two-thirds of the story.

Thanks to Penguin Random House Canada for sending me a finished copy! If you are interested in reading this book, pick it up at your local bookstores now, as it is officially out to the public today!

6 thoughts on “Alyssa’s Reviews: Lock Every Door by Riley Sager”