Over the past few months, I have not read as much YA books as I would have liked. However, I have been read quite a few YA books this month, and “You Must Not Miss” by Katrina Leno was one of my most anticipated books on my TBR this month! 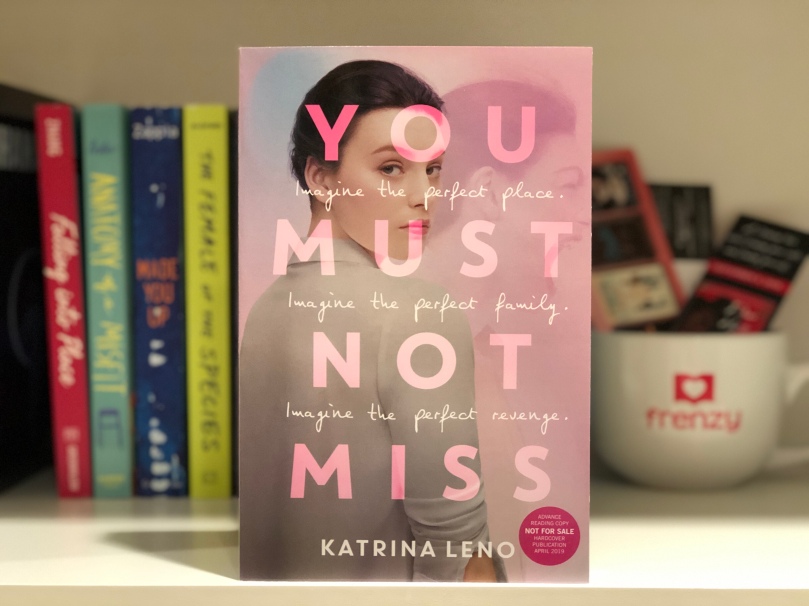 Magpie Lewis started writing in her yellow notebook the day her family self-destructed. That was the night Eryn, Magpie’s sister, skipped town and left her to fend for herself. That was the night of Brandon Phipp’s party.
Now, Magpie is called a slut whenever she walks down the hallways of her high school, her former best friend won’t speak to her, and she spends her lunch period with a group of misfits who’ve all been socially exiled like she has. And so, feeling trapped and forgotten, Magpie retreats to her notebook, dreaming up a place called Near.
Near is perfect–somewhere where her father never cheated, her mother never drank, and Magpie’s own life never derailed so suddenly. She imagines Near so completely, so fully, that she writes it into existence, right in her own backyard. It’s a place where she can have anything she wants…even revenge.

This book is one of the most interesting books I have ever read. To be honest, the ending confused me, but actually in a good way. It was definitely very unexpected and unique.

Initially, I thought that this book was a YA thriller, however I would say that this one falls  under the magical-realism contemporary genre, with a little mix of horror included. There are many different events that occur in this novel that make it hard to identify it within one genre.

My favourite part of the book was the characters and representation. This book brings up a lot of heavy topics, including (TW) suicide, depression, alcoholism, divorce, and sexual assault (just to name a few). But, it also featured some fantastic dialogue about illness and sexism. One of the main characters in this novel is transgender, and I really appreciated the representation. I also loved how Katrina Leno didn’t really focus too much on the character being transgender, and just brought it up at the beginning without being discussed further in the novel. Speaking of characters, I really liked the main character, Margaret (A.K.A Magpie/Mags). While I definitely didn’t agree with all of her decisions, I understand that she was making them because of all of the damage she has experienced throughout the last six months of her life.

I also loved the magical-realism part, as I was not really expecting it at all. If you read my April TBR or Dewey’s TBR posts, you would know that I didn’t really know anything about this story to begin with. I wanted to go into it blind without knowing anything. I am actually really glad that I did that, as I was not expecting the magical/light-fantasy elements (this is not a spoiler, as you read about them within the first 50 pages of the book).

Katrina Leno’s writing was so effortless and magical. I loved her writing style, and since this is my first Katrina Leno book, it definitely made me think about picking up her older ones in the future.

However, like I mentioned at the beginning of my review, I didn’t really love the ending and how the story concluded as a whole. Nothing really shocked me, and while I wouldn’t say the ending was predictable, I would say that it didn’t add anything to the story.

This book is definitely not for everyone, as some people may love some of the twists and turns, while others may not appreciate them.

Overall, I gave this book 3.5/5 stars. Thanks to Hachette Book Group Canada for sending me an ARC!