While the first book I read this year was quite… awful… I was very excited to pick up a unique #OwnVoices contemporary set in a high school! Even though books set in high school are not usually my first pick, I was still thrilled when I received an unsolicited ARC of “The Field Guide to the North American Teenager” by Ben Phillipe in a beautiful package sent to my by the lovely Ashley from Harper Collins Canada/HCC Frenzy! Whenever HCC Frenzy is “pushing” a new book, I always know that it is going to be good. And let me tell you, this one did not disappoint! 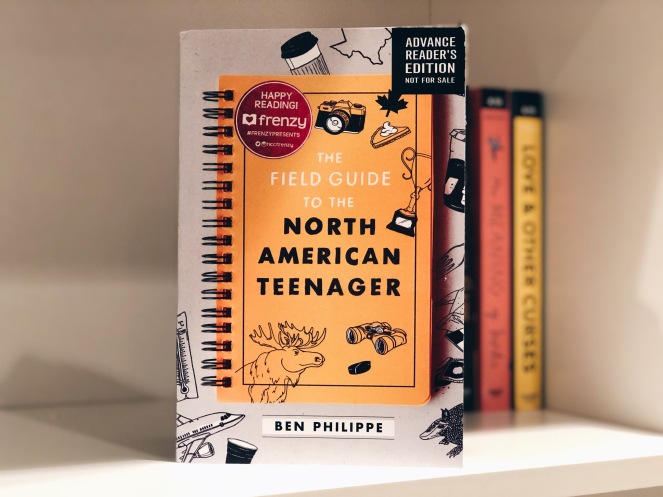 Norris Kaplan is clever, cynical, and quite possibly too smart for his own good. A black French Canadian, he knows from watching American sitcoms that those three things don’t bode well when you are moving to Austin, Texas. Plunked into a new high school and sweating a ridiculous amount from the oppressive Texas heat, Norris finds himself cataloging everyone he meets: the Cheerleaders, the Jocks, the Loners, and even the Manic Pixie Dream Girl. Making a ton of friends has never been a priority for him, and this way he can at least amuse himself until it’s time to go back to Canada, where he belongs.
Yet, against all odds, those labels soon become actual people to Norris. Be it loner Liam, who makes it his mission to befriend Norris, or Madison the beta cheerleader, who is so nice that it has to be a trap. Not to mention Aarti the Manic Pixie Dream Girl, who might, in fact, be a real love interest in the making. He even starts playing actual hockey with these Texans.
But the night of the prom, Norris screws everything up royally. As he tries to pick up the pieces, he realizes it might be time to stop hiding behind his snarky opinions and start living his life—along with the people who have found their way into his heart.

WOW! What a great high school set contemporary to kick off 2019 with (technically this is my second book of 2019, but I’d prefer to forget the first one…)!

This was (obviously) a very character driven novel. And while Norris was made to be an unlikeable character, there was something about him that really appealed to me. I absolutely adored all of his witty and “smart-ass” comments. Norris was a very relatable and flawed teenage character, which appealed to me as I am a teenager myself. I thought that Norris developed quite a bit throughout the story, especially with the help of his friends, who were constantly bringing him back to reality after saying stupid things. Personally, I would have loved for this book to have been written as a first-person narrative instead of a third-person narrative, as I believe I would have enjoyed reading from Norris’s voice just a tad more than a narrator. However, that did not have a big impact on my overall enjoyment and reading experience.

Since this was a character driven book, there were quite a few side characters that were introduced and featured throughout this story. Sometimes I find it hard to differentiate between a variety of characters, since they can all be written with a very similar voice. However, all of the characters in this novel were written about very differently, which was great to read. I loved all of the side characters in this novel, as they each brought important characteristics/perspectives into this story. I especially enjoyed reading scenes that featured Norris’s parents. Although they were divorced, I enjoyed the way they were written. Both parent loved Norris in different ways, and didn’t let their divorce get in the way of raising Norris. Norris’s mom was one of my favourite characters in this story, as she had a great relationship with Norris and didn’t talk down to him.

Austin, Texas was a very unique setting for this story. I don’t think I have ever read a YA book set in Texas, so I was very interested to see how the setting would impact the story. Sadly, Norris only visited a small handful of places in this novel. Therefore, I would have loved to have visited different landmarks/locally popular places in this story.

One of my favourite parts of the novel was the theme of Hockey. I am a HUGE sports fan, and while Hockey is not #1 on my list (Baseball will forever be my favourite), I always love when there is a sizeable sports related theme in YA books. Since Norris is Canadian, he (stereotypically) loved Hockey, and that was very relevant in the book, even though he  lived in Texas. It was a small piece of him that he brought took from Canada to his new home, and he ended up making quite a few unexpected friends from it!

This book explored a variety of important themes that are very relevant to todays day and age. Some of the themes/issues I expected to pop up in this story since the main character is a black French Canadian living in Texas, while some of the other talked about issues I was not expecting. I appreciated how Ben did not dwell on these problems, but added them sporadically throughout the story in order to further develop Norris’s character. I thought that they were all important to talk about, especially since this was a YA novel featuring a wide cast of characters.

I really enjoyed and appreciated the ending of this novel. While it wasn’t a “happily ever after” (like I had expected it to be), I felt that it was left off on the right note. Books like these don’t always need a complete conclusion, and I thought that Ben took advantage of that and used the “open-ending” concept perfectly.

Much to my surprise, this is actually Ben Philippe’s debut novel! He did a fantastic job writing it and I look forward to reading his future novels.

Overall, I gave it a 4.25/5 stars! To read all of my thoughts while reading this book, click here.

Thanks again to Harper Collins Canada/HCC Frenzy for sending this novel my way. I am so glad that I read it!

That is all for my first review of 2019! I hope you are all having a wonderful start to the new year. Have you read this book yet or are planning on doing so? Let me know in the comments!